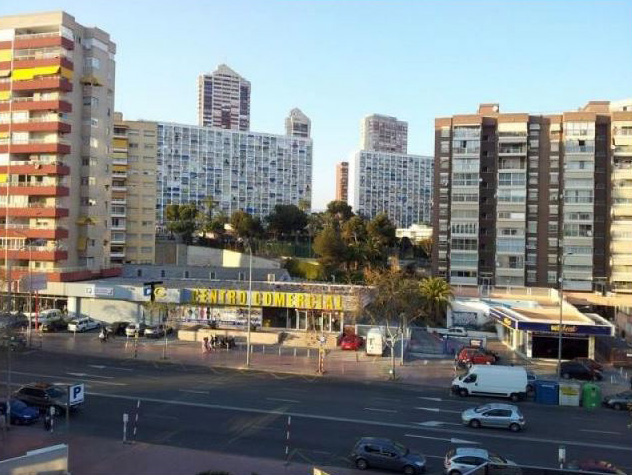 Hi all!
After a small delay at Schiphol, we arrived at Alicante airport around 20:20. Someone was already waiting for us there to take us to the clinic (by ambulance/taxi?). Mum was checked into the clinic straight away. After receiving the necessary information, I went to a hotel next to the clinic.
After a night’s sleep, Mum’s blood pressure was measured in the morning and blood was taken. Doctors came to introduce themselves in the afternoon, and to go over things for the next few days. Mummy does not mind . So far, everything was fine, and we were looking forward to the rest of the time with confidence.
So far, a message from us!
Greetings from under a clear blue sky and a sunny Benidorm,
Ida and Monique
P.S.: @Mariet, thanks for your card!!!
27.03.2012 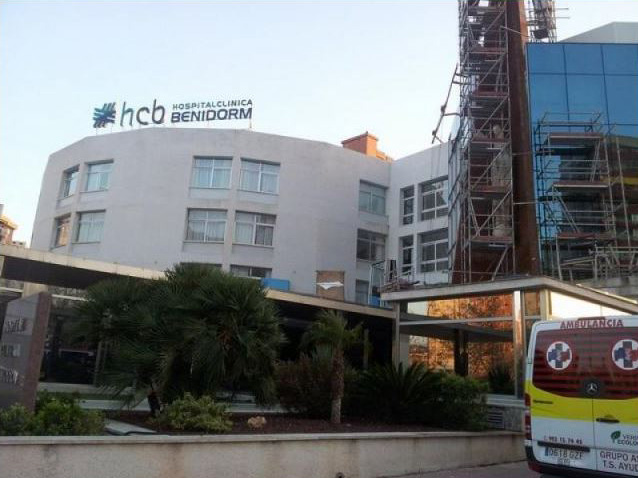 Hi all,
This morning Mum had hip surgery. It all went well and smoothly. She had an injection in her back and a twilight sleep. She did not feel too bad about it, however, she did get a few things from the operation, and she liked that. This afternoon, she insisted that they speak Portuguese in Spain, but this evening she could chuckle about that. She says she does not have much pain, but of course she still has painkillers . She is in ICU today (which is standard after surgery) and may return to the ward tomorrow. Due to this, I could only visit her for 2 hours. Friday or Saturday, we will go to the apartment at the rehabilitation centre where she will start rehabilitation on Monday (5 days a week, 2 hours a day).
I too am enjoying myself, although it can be boring to sit alone on a terrace. For the rest we have nice weather (just like you), although the wind is sometimes a bit fresh.
So far, the news again.
We will keep you informed!
29.03.2012 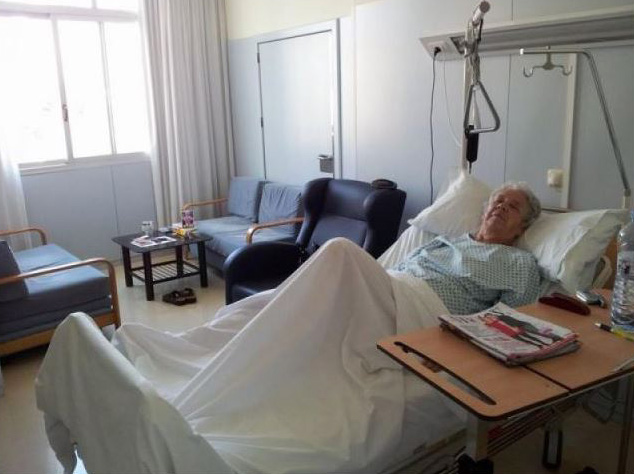 Hola Amigos!
Thank you all very much for all your kind congratulation emails, texts and phone calls! Mum had a birthday feeling after all! Of course, I did get her a present.
Love from Benidorm! 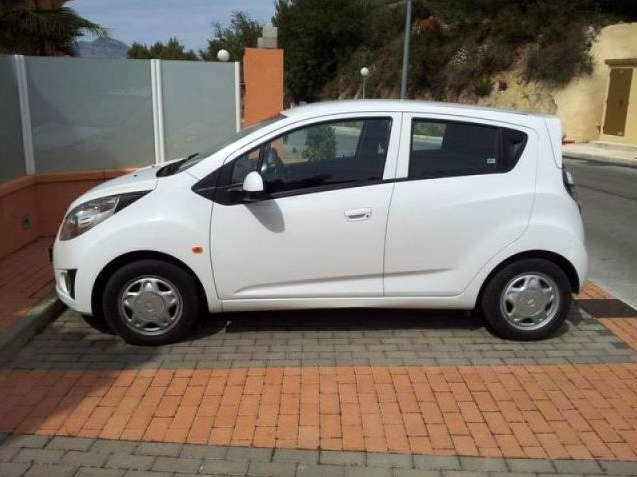 Hola amigos!!
In the morning we moved from Benidorm to Benitachell/Moraira (about 40 km away). There were things to arrange like getting the crutches, the medication prescription, going to the pharmacy, etc. In short: I had to get into action.
We were picked up around 11:00 by Paul (physiotherapist at Medifit) who took us to the apartment hotel. On the way, we saw beautiful blossoming mimosa, cherry, and peach trees. We also saw trees with lemons and oranges.
When I arrived there, I had to pick up the rental car (Chevrolet Spark). Here too, Paul helped me a little. Then did some shopping and back to the aparthotel. After that, we were settled, and the peace returned.
[/one_half] That afternoon we sat on our quite spacious balcony to enjoy our new view (much better than Benidorm!). It was cloudy with occasional sunshine, but a temperature of 20 degrees.
Flat looked great, and food was delivered to the door.
Mum was shuffling around on crutches (not too much, that is not good either), but was going a bit better than the previous day. She had also been doing her exercises. Monday at 11 o’clock, the chauffeur would take Mum to the rehabilitation centre for the first time.
So far, the information from a sunny Spain.
03.04.2012 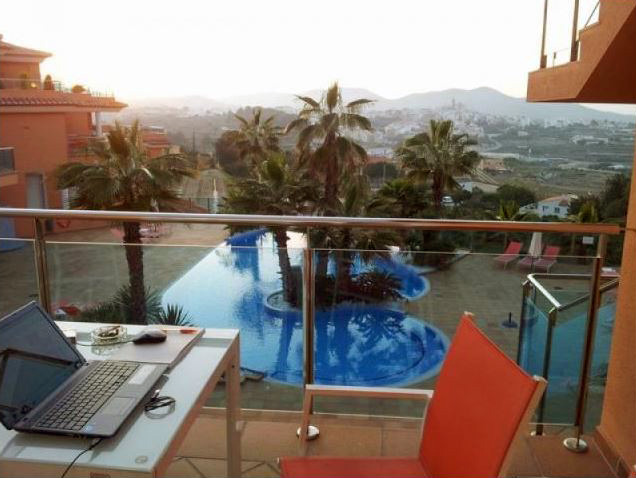 Hola Amigos!
Last Monday, Mum started rehabilitation. Every day the walking goes a bit smoother. Even at the rehab centre, they are amazed at how well she is doing !!!! She hardly needs any painkillers anymore, and the wound is healing nicely.
That afternoon, after lunch, we drove to Moraira and enjoyed sitting on a terrace on the boulevard. The sky was not blue anymore but was still very pleasant to be outside.
Unfortunately, there are people who sometimes get a mail and sometimes no mail (although the mail addresses are correct because we have had a reaction from everyone on previous mails). Hence this solution…
Adios from the playa 🙂
07.04.2012 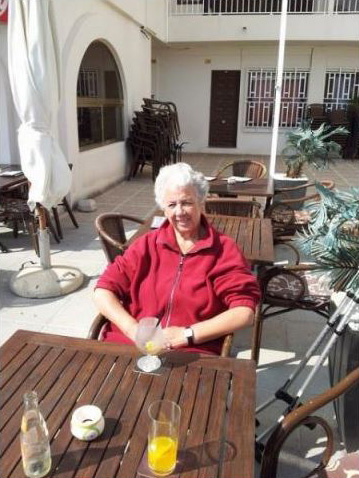 Buenos días amigos!!
Again, a small update from Benitachell….
Mum´s rehabilitation is still going well. In the rehab centre she is exercising on the bike, treadmill, and other equipment. She has nice physiotherapists (unfortunately all foreseen… Grrrr) who ask her every day how she is doing, and if necessary, adjust the program. It goes better every day. She herself says that she is practising for the NY marathon (the Nijmegen four days seems more realistic haha). Next week I will post pictures of mum exercising and of the nice villages and such.
This morning I did some shopping for Easter. You know the drill: eggs, toast etc. This afternoon we are going to Javea to see what the terraces are like and to explore the surroundings by car. Rehabilitation centre has provided a wheelchair, so that these undertakings are a bit easier for mum 🙂
Hasta luego!
10.04.2012 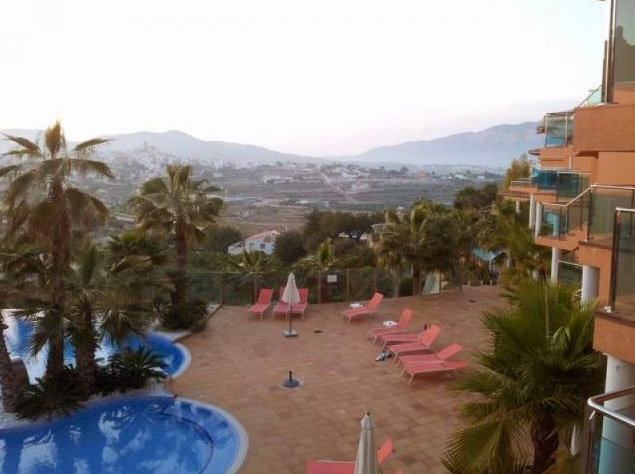 Buenas tardes amigos!
What a great life we have here! Our breakfast, lunch and dinner are delivered to the door, just like the laundry that was dropped off the day before . After breakfast, helping mother with her shower, and then taking her to rehabilitation, and then (sometimes) driving to Moraira for a coffee on a terrace, or sitting on a wall, looking out over the sea. After about 2 hours picking up mother at Medifit (rehabilitation centre) and back to ‘home’ for lunch. After that, mother goes to sleep for 1 to 1.5 hours. The rehabilitation programme is now slowly being stepped up, which mum is noticing. After her afternoon nap, she regularly goes in the car to, for example, Moraira, Javea, Denia or Calp for a drink.
According to the Spaniards we had worst weather during Easter. We did not find it that bad . Nice walk on the boulevard [/one_half].
Next Thursday, the stitches will be removed, so no day for terraces. This will be a day of driving up and down.
Attached are films of the rehabilitation and photos of the surroundings.

Buenos dias!
Again, a message from us…
Last Thursday, mum´s stitches were removed by Dr Campagnard. He is also the one who performed the operation. He is very satisfied with the healing of the wound .
Mum´s rehabilitation is still going very well.
The last few days the weather here has become a bit less (i.e., more clouds and one rain shower in the evening). Furthermore, we are still enjoying ourselves! This week we had a lovely lunch on a terrace (right on the beach and the sea). Mum had asparagus and I had delicious mussels… Njammie! Miguel (physiotherapist) gives us tips on places we absolutely must see, and every place is just as beautiful and cosy. Absolutely great!
Next week Paul (the physiotherapist who picked us up in Benidorm) will be back from holiday, so he will probably take over the supervision of the exercises from Miguel.
So far, the news again 🙂
PS: @ Mariet: you do not need to bring sticks and/or a wheelchair. Mum will take the sticks, and ‘transport’ within Schiphol will be arranged .
20.04.2012

Buenas tardes!!
Unfortunately, it is already the second-to-last day in beautiful Spain ☹…
After this morning’s rehabilitation, we drove on to El Portet, Moraira. There is a lovely little terrace, right by the sea. We had a nice lunch and coffee and enjoyed the sun while we still could (we had seen the weather reports of the Netherlands and did not feel like going back , haha).
Tomorrow, Mum will go to the rehabilitation centre for another hour, and then it is really time to pack our bags. The car must be returned at 13:00, and at 18:00 people from Clinica Hospital Benidorm (HCB) will pick us up to take us to Alicante airport. Then we will fly back to the Netherlands at 21:15, where we will land around 23:55.
The whole undertaking of 4 weeks in Spain for a hip prosthesis and 3 weeks of rehabilitation went very well, and should it be necessary, it can definitely be repeated!
Thanks to the people from HCB and Medifit! We really had a great time!
Hasta luego

Hello all!
In the meantime, we have been home for more than a week and a half. The suitcases are unpacked, and we remember sunny Spain with nostalgia.
Aftercare has been arranged, and mum has also found another physiotherapist for the further rehabilitation process. She is still doing well .
Thanks again to all the people at HCB and Medifit for taking such good care of her!
All we can say is see you soon amigos!
THE END
Original text in Dutch
http://benidormbasterd.waarbenjij.nu/reisverslag/4221245/eerste-week-benidorm
www.benidormbasterd.waarbenjij.nu

You can read more about the usage of our cookies or turn them off in our settings..

This website uses cookies so that we can provide you with the best user experience possible. Cookie information is stored in your browser and performs functions such as recognising you when you return to our website and helping our team to understand which sections of the website you find most interesting and useful.

Funtional cookies should be enabled at all times so that we can save your preferences for cookie settings.

If you disable this cookie, we will not be able to save your preferences. This means that every time you visit this website you will need to enable or disable cookies again.

These cookies track if you have visited certain pages after clicking on a Google or Facebook ad.

Please enable Strictly Necessary Cookies first so that we can save your preferences!